Home » What is the Difference Between Indian and Nepalese Food?
Contents show
1 Still Wondering about the differences?
2 Naan or Dhido?
3 Do you prefer Momos, from where?
4 Do Vegetables make any difference?
5 Does Borders change the taste?
6 The Traditional tastes of both Nepal and India
6.1 Related Posts: 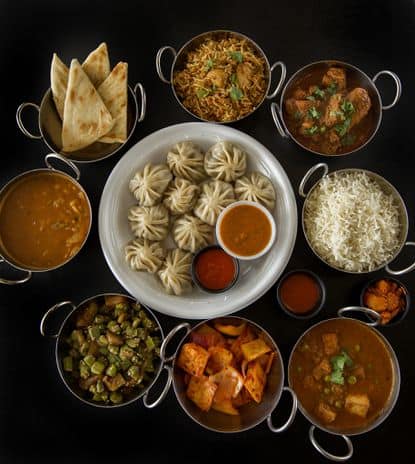 We Indian prefer to have something spicy and tasty. But do we get the difference between Nepalese Food and Indian Food? Most of us fail to figure out the difference. The exotic and spiciness are the basic nature of both the cuisines. Here we go with the differences.

Nepalese cuisine is more inclined to the style of Tibet and China in particular. But we cannot forget the spiciness of tastes from India. As we see, both India and China share the same spices and the love for curry and rice remains as it is. Indians like to have heavy creamy and sweet food but Nepalese turn out to be the opposite. Not to forget but they are amazing in their own way. They might use a bit different styles of frying and chopping, but the blend of tastes is something which makes both very unique.

Still Wondering about the differences?

First let me take you to the Cuisine inspired by the flavors of Asia. As Nepal has its own authentic cuisine, it still includes Indian Spices like Turmeric, Chilies, Ginger and Garlic. I am sure that many of us crave for Momo’s and the chutney they use. Everyone searches for the perfect and tasty Darjeeling Momo, Don’t you?

Nepal has also a stagnant love for rice, like India they also prefer to have Pulao with butter or ghee, yogurt or papadums. Nepalese prefer more soup and rice at times, which is unlike India. We prefer to have dal or curry as our side dishes. This doesn’t mean that they don’t have dal or curry. It is just about preferences. The common thing is about the Chutneys that go with everything be it spicy or sweet. The special Nepali Chutney which every single person craves for is mixed with the essence of flavours Cardamom, Cumin, Cloves, Cinnamon, Onion, Garlic, Dry Ginger, Turmeric, Red Chillies, Fenugreek, Mustard, Coriander. Both the Nation’s Cuisine is unique in their own way. Indians prefer naan with side dishes cooked with butter and spices making it heavy and full of flavours. When I think of Nepal, they have this dish called Dhido, or Dheedo, this is a dish made with Buckwheat Flour, it seems like a no-frill porridge. It is served with chicken or pork gravy or with some vegetable preparations. The next difference lies in the type of soups, Nepalese prefer more of Thukpa, it is a type of noodle-soup flavoured with Chicken or some may prefer vegetarian Thukpa as well.

Do you prefer Momos, from where?

The more we talk about Nepal the more we get inclined to Momo and its chutney, Nepalese tend to have lighter food but tend to be spicy at times. Unlike Indian food, they use less cream or milk. They tend to add species and add butter or ghee. Sometimes, I think both the cuisines might be the same but the tiny bits of cooking make the difference. A person will surely understand the difference in taste of Momo from both the nations. They differ firstly in taste, size, shape. One might not like Indian Momo after trying the authentic Momo from Nepal.

Do Vegetables make any difference?

Although, Vegetables are a common factor between both apart from the spices. Tomatoes, Potatoes and lentils are very common. They change their structures while tossed in a pan. Indians also use the same but they add more to the required vegetables. Onion is common in each and every aspect of dishes served. The vegetables are mostly stir-fried and served. They have this crispy and non-soggy taste in the vegetables. Indians tend to deep fry the vegetables with more spices. A few aspects in both the cuisine make it utterly unique and tasty.

Does Borders change the taste?

Nepal shares its border with India and China. But most of the Nepalese tend to follow Hinduism. Unlike India, they do not believe that Hindu need to be Vegetarian. This makes a big difference in the way the food is made in both the nations. Nepalese tend to have meat (Chicken, Goat, Pork or Beef) with some stir fried vegetables. In India, it might turn out to be a little different.

The Traditional tastes of both Nepal and India If I talk about traditional Nepal, I will often come across the term ‘Thakali’. Wondering what it means? It is the authentic cuisine of Nepal. Although the food in Nepal is inspired by Asiatic Cuisine, the authenticity of original Nepali will not change. The traditional culture of making good food is vital in both the countries. The recipes of Thukpa and Dhido have two alternatives in the Indian Cuisine. The delicacy of noodles in soup is a main dish prepared in Nepal, Indian might not like the concept of having noodles very often. Dhido is enjoyed in the mountainous areas, best suited with the cold climate.

In Nepal the vegetables are stir-fried and nor mashed. They have this chunkiness with flavoured spices which is served hot on the platter. Moving on to India, we tend to add more spices and smash or make puree of the vegetables. We like to have the smooth texture of flavoured spicy vegetables. At times, we even tend to deep fry it, sprinkling the ‘masalas.’ People from Nepal also rely on Daal Bhat Tarkari, it is a bit different from the Indian recipes. They add lentils to the soup with spices to flour it which is again served with Bhat.

The curry they have is commonly mixed with Lentils and spices as curry powder. This soup goes well with every dish. If I row down, we will come to think why Momo are so different in taste? The answer is simple, the spices, herbs, type of meat, the style of thawing the dough makes a difference. Usually, they make dim sums, with different types of meat, such as chicken, pork or beef which are minced. It is further stir fried with the vegetables of choice, the dough is commonly filled with onion and cabbage. The vegetables along with minced meat are stir fried and flavoured sauces are added with salt and pepper and sometimes, to make it spicy they add the red pepper paste to it.

Indians like to keep it simpler; they like to add chicken as a meat preference with vegetables like onion and cabbage. They too stir fry but add less sauce to the stuffing, they put the ingredients in a dough and rest it to steam.

Apart from the favourite appetizer Nepal is also famous for Chatamari. The first time I encountered this dish, I was pretty confused whether it was a pizza or not. Yes, the dish might look like pizza but the cheese is missing as the toppings. You will find the toppings to be mostly meat and tomatoes and onions. Nepalese tend to add a lot of pepper in every dish whether be an appetizer or main course.

Let’s talk about some popular food originating in India. India is known for its diversity in Food and culture. Every single Indian has different taste buds. Travelling from North to South we vary from Chats to Mutter Paneer to Biriyani etc. We prefer creamy and heavy with spiciness and buttery food. The favourite street food for every Indian is ‘chat’ . It is a street food where the base is made up of crispy or fried bread topped by chutney and onions and ‘bhujia’. It is also served with ‘Dahi’ or yogurt.

The next comes Paneer, the next favourite food. It is cooked with different ingredients like, peas or mutter, palak, butter and more. The process of cooking is very different. We prefer to add heavy cream and make it ‘Malai Paneer’. We make enormous dishes with this dairy product. The case of non-vegetarians is a little different. They prefer to have mutton or ‘Rogan Josh’, at times, mutton may be substituted with lamb, the gravy is made with ginger, garlic, onion, yogurt, and spices, sautéed and mixing the ingredients well. Most of the world are much familiar with the Northern Indian food, they are flavour full slavery and mixed with many spices and ingredients. Butter Chicken, Chicken Tikka Masala are very much popular in India. The marinated chicken with spices and herbs and yogurt makes it more flavour full in depth. However, it is a pleasure to have food full of taste and when it is served hot.

When we are figuring out the differences, let me tell you that Nepalese cook their food in a much healthier manner than the Indians. Although they are no less in taste, but they do not add

· Heavy cream in their food, no matter what it is like.

· They do not rely much on Flatbreads, mostly naan.

· They avoid sweeteners, or sugar in their food.

So, what are you waiting for, pack your bags and start off with a tireless journey of foods which will rejuvenate your soul, mind and heart.